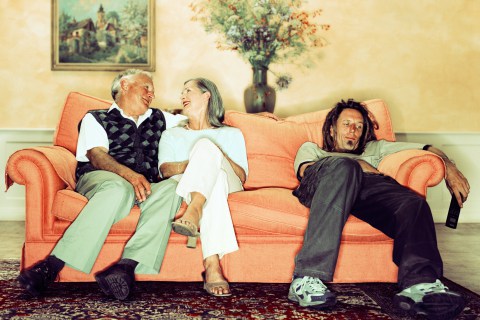 Staying in the Basement: The Spending & Borrowing of the Millennials and the Slight Edge

For a parent, the only thing worse than a grown child leaving home is a grown child not leaving home. It’s natural that children, once matured, leave the nest to build nests of their own. Today’s economic conditions, however, have kept many young adults living at home well into their twenties. This, in turn, has left both the economy and parents everywhere depressed. We spent this week’s show discussing this phenomenon, its causes, and its effects.

In 2012, according to Pew Research, 36% of Millennials were living with their parents (aged 18-31 ). This is up 4% from 2007. Of these Millennials living at home, 61% had either some college or a bachelor’s degree, and a full 50% were not in the labor force. The dismal job market, particularly for young adults, drives both these numbers. Few can find a satisfying job, and those who can’t stop searching. They either remain out of the labor force or go to college in hopes of bettering their prospects.

Unfortunately, the return on investment for college degrees has been diminishing for years. The disparity in earnings between those with and without college degrees has started to close, and the bulk of the difference can be attributed to differences in temperament rather than in the benefits of a degree; that is, an individual who would pursue a degree is one who is naturally driven, disciplined, and hard-working. They would likely make better money than their undisciplined counterparts even without a college degree.

These facts have not discouraged individuals from pursuing degrees, however. Nor has it stemmed the tide of individuals going severely into debt to pay for them. Student loan debt has increased 300% in the last 10 years. It is now worth $1 trillion and continues to grow exponentially. Student loans are the fastest-growing sector of debt in the country, and tuition has increased along with it. We are now in an inflationary spiral in which tuition increases to lower demand while student loans increase to increase supply.

Once students attain a degree and enter the workforce—or not—they are burdened with massive debt. Many cannot afford rent, let alone a mortgage, because of high debt servicing payments. And unlike other forms of debt, the US government has ensured that student loans cannot be discharged in bankruptcy. Students are committed to decades of payments.

At Garvens Mortgage Group, we see instances of this every week. Individuals either looking to buy their first home or refinance one they’ve had for years find themselves unable to qualify because of their student loans. Loan servicing can easily consume 10-15% of their gross income. Homes, cars, clothes, virtually all consumables are unattainable because of the cost of these loans. Resources are being diverted from the productive economy to colleges and loan servicers—which, increasingly, means the federal government. The quality of economic growth provided by colleges and the federal government for the broader economy is not high.

After school, with so few job prospects, Millennials increasingly take advantage of the free or low rent offered by their parents to pay down their student loans, often with wages far below what’s needed to successfully support themselves and their loans. The mythology surrounding college degrees convinced them that any degree—from political science to mime studies—will provide lucrative job opportunities after graduation, when this truly is not the case. They not only have high debt and a worthless degree, but they have forfeited 4 to 6 years that could have been spent gaining desirable skills.

Granted, many of those Millennials living at home do so not out of desperation but to build a strong financial foundation for their future. Many are paying cash for college, working part- or even fill-time, and saving money so that when they do leave home they are in stronger financial positions than most of their counterparts. This approach brought us into the second hour of the show, which discussed ‘the slight edge,’ or those with financial or personality characteristics that give them a slight edge over others in their personal and professional lives.

Undoubtedly those without student loans have a significant edge over those who do. Student loan debt will be the financial story of the next decade, and will play a prominent role in determining the successes and failures of an entire generation.