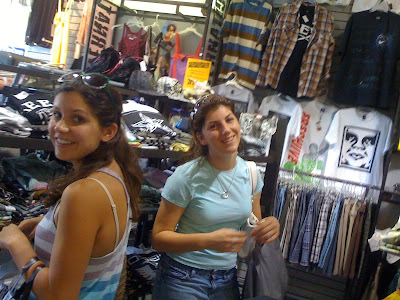 Of all the scary financial news in the past few weeks, the scariest for marketers are the dire 4th quarter retail sales predictions. Yesterday the WSJ ran an article, “Neiman Marcus Sees Bleak Holiday: Luxury-goods Retailer Reports a Doubling of Its Quarterly Loss and Warns the Wealthy Are Cutting Back”. If that’s not scary, I don’t know what is, especially since, until recently, luxury goods were retailing’s bright spot. WSJ had a story titled “Fashion in a Faltering Economy”. Here’s an excerpt I found especially amusing:

Excuse, me? I don’t recall the 80’s ever having an “edgy moment”; “rich hippie” sounds like an oxymoron if there ever was one; but I digress.

With all the doom and gloom, it may be interesting to see what is known about Millennial’s fashion shopping habits. First of all, they don’t shop in department stores, for a score of reasons, among the most prominent being that is where their moms shop. Millennials much prefer smaller, more boutique like shopping venues, even if they happen to be chains that act like boutiques such as Abercrombie, American Eagle, or Limited. The photo above shows my friend, Melissa and one of her friends having a birthday shopping spree on Melrose, far from Nordstroms, Macy’s and JC Penney. According to BIGresearch, Melissa is pretty typical: 31% of 18-24 year olds say they shop most often for clothing at a specialty retailer, compared to just 16% of those 25 and older. This month, Fortune picked 3 specialty apparel retailers as their ‘five retail winners’:

American Apparel: The Los Angeles based apparel chain sells basics with a twist: Its advertisements tout both the company’s high quality, hipster-friendly tees and its fair-wage policies. Such meticulous branding has not only distinguished the retailer from Wal-Mart, but has also enabled American Apparel to boost profits 42% this quarter to $6.8 million and same-store sales by 23%.

Aeropostale: Aéropostale reported a 43% increase in profits in 2Q, and an overall sales increase of 21%, to $377.1 million. Even more shockingly, the New York based chain saw same-store sale growth of 13% this July, compared with a decrease of 12% in July of last year.

Not all specialty retailers are doing as well as these three; Abercrombie & Fitch and Urban Outfitters have both suffered small losses, which Fortune speculates as having to do with higher prices/lower value.

When Millennials do venture into the world of mass merchandising, Target is far and away their favorite. We have discussed the reasons for Target’s status as Millennial darling in previous blog posts, so won’t rehash here, other than to point out that BIGresearch data provides confirmation: twice as many 18-24 year olds say they shop Target most often for clothes than those 25 or older.

Macy’s is thinking of revamping its famous Cellar of housewares in its flagship Manhattan store to appeal to younger shoppers: “By giving teens a separate entrance and their own place to hang out – similar to creating a rec room in the basement – Macy’s is hoping kids will feel less self conscious about shopping where their parents shop.” (Fortune, “Macy’s searches for the fountain of youth“). This might work, if like Target, American Apparel and Urban Outfitters, they emphasize value as well as ambiance. Millennials have money but they don’t think of themselves as affluent. Sniffing out the bargains AND the fashion is more than half the fun.